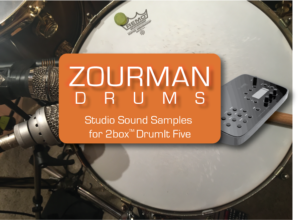 Hi all!
I just wanted to highlite that a 3 zone flavour (down mic based) of Zourman Drums/Drumforce legendary 1920s Ludwig Black Beauty Snare sample can be found in the factory library of 2box DrumIt Three. (Big thanks to 2box for making this possible!) It is named ZD BB Dow Dry RSC can be found in /snare/3zones on all delivered “Three’s”.

This 14×6.5″ Super-Ludwig Deluxe/Inspiration model is produced somewhere between 1924-1930. A couple of signs indicates that this legendary snare was a preproduction unit to a special artist and that it is therefore produced before 1924 (We believe around 1922). The series was called Black Beauty because of the black shell finnish (often with engravings).

Jouni at Drumforce bought the 14×6.5″ snare from the legendary drumshop Pro DrumShop at Vine Street in Hollywood in 2009 for a fortune. According to Pro DrumShop, the snare had been left by the owner to be sold on consignment. The owner who left it was the legendary Drum Doctor, Ross Garfield. Ross is a well-known drum technician and supplier of drum equipment for some of the best-known bands in the world. (He supplied the drums to Metallicas Black Album)

We can only speculate where this rare snare was been used when Ross owned it and during the time since 1920s. What we do know is that this snare showed up in Sweden and at Big Jambo Studios/Drumforce!

Zourman Drums/DrumForce recently launched the complete pack with the rest of about 6 sound packs of the snare especially for 2box Drumit Three and to support 3 zones. (e.g. Head, Rim & Crosstix in the same dsdn) This pack also works for DrumIt Five, but here you need to manually select between Rim or Crosstix sound.

Take a look on Studio Samples by Drumforce &#038; Zourman Drums

Please note, to be able to utilize 3 zones on DrumIt Three you need to have a piezo, switch and switch based e-pad like the Yamahas. We have implemented it ourselves by using a piezo/piezo based snare + a Roland BT-1, but it will consume one extra channel.